Twinkles is a gentle giant of sorts, and though tall it's very lanky. It likes grapes and other soft fruit.

Twinkles has lavender colored hair, cut short, with a wavy texture. It has snow white skin and yellow-green eyes, which match its tongue- which is hidden underneath a surgeon's mask which has been painted on to resemble a clown's makeup. It wears a sky blue sweater with four purple buttons down the front, a pale yellow vest, purple pants with horizontal blue stripes, and black boots.

It's very friendly and calm, tending to enjoy being gentle and soft with others. It tries its best to keep itself from hurting others with its big sharp claws, though sometimes it's unavoidable. It can get very protective over others and will even become aggressive if someone he's close to is being picked on or fucked with. It has a very strange attraction to any kind of heat, sort of like a lizard, and will sit by heaters or cuddle close to people to receive warmth. If, somehow, you manage to get it horny, its demeanor switches around and it becomes very possessive and sadistic; therefore it's very rough during sex and thoroughly enjoys scratching, biting, and sometimes even degrading the other person.

-it talks, but softly, and its voice is kind of wispy

-it can do all sorts of circus tricks, but tries not to show off too much

-it loves people who are smaller than it 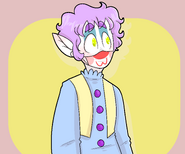 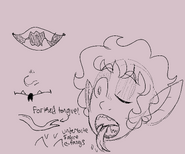 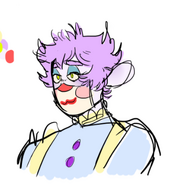 Add a photo to this gallery
Retrieved from "https://clown-limbo.fandom.com/wiki/Twinkles?oldid=597"
Community content is available under CC-BY-SA unless otherwise noted.