Sanguine Manchester was born in an affluent family in Ohio. He always had a strange love of music and performing. Unfortunatley his grades were pathetic and his life was going nowhere as a result of his eccentric lifestyle. At 18 he told his parents he would focus on his music and if he couldnt make the rent for over 3 years, he would leave.

Being a mediocre singer from a spoiled life really doesn't help sell records, and he saw a flyer asking for performers. So naturally he asks his parents if they would support him in this im exchange for him moving out. Salvia and Sylvester agreed, but if he ever quit and came back home, he would be cut off, and left out of the will. Sanguine, not caring too much about the money agreed.

He goes to this place, and much to the surprise of everyone involved, ot was a circus. His parents look at him, thinking he will beg for them to take him back, but, he starts talking to everyone like hes known them for years, most were put off by his dark clothing, strange taste in music, and crossdressing, but he loves it here and wouldnt change a thing.

Sanguine is a firebreather. As such, he helps with the various fire based acts, while Boomer provides the pyrotechnics. The ring of fire and the ending fireworks are some of his favorite events, even though he takes a back seat to the much more popular performers. He also dabbles in sword throwing.

As his parents provide a lot of financial support for the circus, Sanguine also tends to the ticket sales, consessions, payroll, and making sure there is always maintinence staff, to assure the saftey of all equipment used.

Sanguine is a goth. He loves the music, the fashion, the art, just everything aside from literature. He still wants to try to get into it though.

He's a proud transvestite and has a wicked sweet tooth, trying all kind of candies, and gums, while also trying on clothes of all kinds, and collecting sick weapons.

He sings a lot, and enjoys affection, almost craving it. As a result of his upbringing, he isn't fond of the day time, or taking criticism. His parents being dissapointed in him in the past makes him fear future dissapointment, and having children Children also mortify him to an unbelievable extent, as they are either unbelievably cruel, or terrifyingly affectionate

Being ignored is something that causes the majority of his anger, and being forced to wear hot clothing in Summer is the worst.

He is openly sexual toward any adult character aside from his family members, and doesnt show any shame. He's immature from his issues with his parents, and because he got everything he wanted except their true approval. He's offended when others ignore or speak ill of him, even if its just. When push comes to shove, even at his most empathetic his first response to a problem will be throwing money at it, or showing anger. 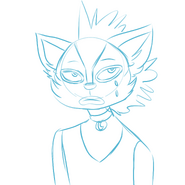 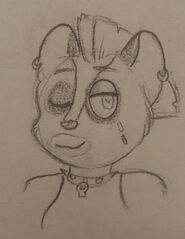 Add a photo to this gallery
Retrieved from "https://clown-limbo.fandom.com/wiki/Sanguine_Manchester?oldid=330"
Community content is available under CC-BY-SA unless otherwise noted.