Flou is a softie with a french background who loves to give out friendliness and warm welcomes! He dances and hands out little whistles.

Flou wears a lot of different shades of pink. His shirt and pants are baggy, with his shorts tucked into his boots; and his hair is blonde, most of which is hidden under his hat, which has two big floppy bunny ears.

Cheerful, friendly, and kind, Flou tries to give everyone the respect and love they deserve, but sometimes that gets him into trouble. He's very easily scared and timid, especially toward the unknown (i.e. the dark), and likes to hold onto people's hands, greatly during these times.

He'll gladly cuddle with anyone, offering hugs and squishes to cheer someone up or just for fun.

Also, when he laughs too hard, he covers his face with his floppy hat ears out of habit. 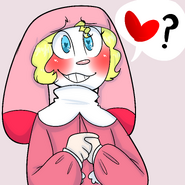 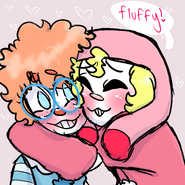 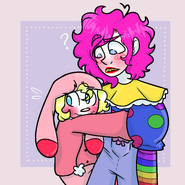 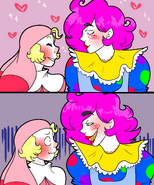 Add a photo to this gallery
Retrieved from "https://clown-limbo.fandom.com/wiki/Flou?oldid=529"
Community content is available under CC-BY-SA unless otherwise noted.