Sprinkles (loves him and hugs him)

A small, cheerful, tricky girl with big poofy pigtails; Duckie lives up to the title of clown.

Standing at 5'0 (not including her hair), Duckie has pale skin, bright red hair and honey-colored eyes which have hearts for pupils. Her clown makeup consists of a white face with a bright yellow nose and two blue spots below each eye that slightly resemble cartoon tears. Her outfit is a seafoam green shirt with a white collar and two buttons along with a purple overall dress with yellow polka dots. She also wears a yellow flower in her hair.

Duckie is a very cheerful girl; she loves to laugh and make others smile, but mostly herself. She loves messing with people and pulling pranks, and definitely gets in a lot of trouble, but always has a good time. She loves to pick on people and do little things to annoy them, especially people in more power or who are bigger than her. Sometimes she doesn't know her limits, although she means well; and if she manages to really hurt someone she'd feel awful.

She's very easy to excite and entertain, making her easy to please. She can become instantly ecstatic about something, especially if it's new, and tends to have a lot of admiration for scary monsters and people.

She can understand things very well, even though she can be defiant sometimes. She has a very hard time communicating her thoughts verbally, though she tries hard to do so; often making her sound like a little kid trying to talk. She shows affection through physical contact when she can't do it verbally.

-She will gladly allow herself to be hurt or whatever, but if you touch one of her friends she will panic and possibly cry

-She's very sensitive to spicy things and cannot. Eat peppers. Onions are spicy to her.

-She asks for attention by kicking her friends in the shins

-She likes tall people because they make good furniture

-She's mostly gay/pan, but pretty much all her relationships are platonic anyway

-She hates being called 'princess' because it makes her flustered

-She eats a lot of soft food like applesauce and soup

-She will try to escape if you pick her up without warning, but most of the time she doesn't actually want you to put her down

-She has crushes on 6 people

Duckie is a demon, literally. She keeps a human appearance most of the time so as not to scare people, but in her true form, her hair is darker, her hands turn to large claws, and she has horns and a forked tail. Her teeth are very sharp and yellowed. Her colors, in general, seem to get duller and darker when she changes to this.

Her personality shifts only a little bit; when she's in her natural state, she's more loving and just a little more tricky, acting almost like a cat at times. 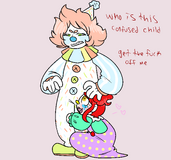 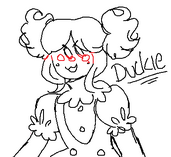 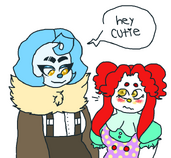 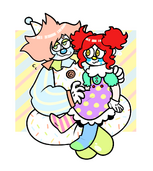 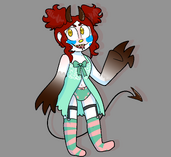 Add a photo to this gallery
Retrieved from "https://clown-limbo.fandom.com/wiki/Duckie?oldid=642"
Community content is available under CC-BY-SA unless otherwise noted.