don't let him perform in front of large crowds

Cheeky is a disgusting man. He loves to hurt others, in any form but mostly physical. His favorite knife is a small one with a black handle that he carries with him at all times.

Cheeky loves to make people angry or scared, and will do things just for that effect. He loves to see bruises and scars, especially if he produced them himself, and especially on victims he's grown especially attached to.

He hates when people are taller than him, and will purposely piss them off especially. However, if they're dead, he'll probably become attracted to them. He absolutely loves people who are small and weak, who are less likely to put up a fight; though he's not opposed to some struggle. 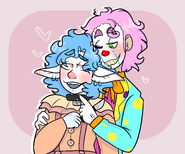 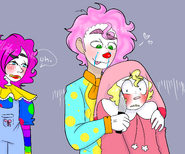 Add a photo to this gallery
Retrieved from "https://clown-limbo.fandom.com/wiki/Cheeky?oldid=548"
Community content is available under CC-BY-SA unless otherwise noted.