Boomer is a loud and sometimes aggressive toony boy, and even when showing affection can seem forceful. He arrived in a cage one day and nobody questioned it. Everyone loves him. Edit

As a pup, Boomer had been abandoned and left in a cardboard box by the side of the highway, later to be discovered by a group of humans. Nicknamed “Boomer” after his “booming”, wild personality.

Confused by what exactly he is, throughout his life he’d been considered a monster, and was thrown into various freak show exhibits, travelling around the globe with a small group. Labelled the “Dog-Freak”, or “Monster Mutt”, and various other names. (Often times degrading, but he’d just laugh it off.)

After a few years had passed, and after finding a flashy poster advertisement in a big city, Boomer decided to leave his travelling group to take his sideshow job to the next level, and join an actual circus. Limbo Circus.

Upon arrival, Boomer quickly felt at home and met the greatest friends he could ever wish for, thinking of them as family.

With his reckless and rowdy personality, he decided to crank his performances up a notch after joining Limbo. Adding in explosives, fire, and ridiculously dangerous stunts to further awe the audience and boost his fame and idolization. Besides doing daredevil performances in the circus, he also does relatively normal clowning. Often times he’ll do street performances in public spaces, too. 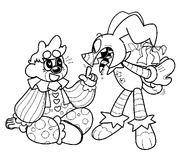 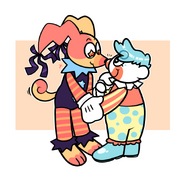 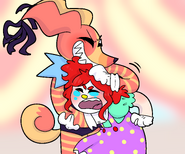 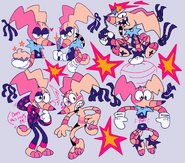 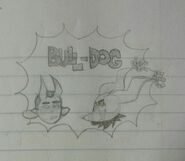 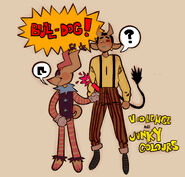 Add a photo to this gallery
Retrieved from "https://clown-limbo.fandom.com/wiki/Boomer?oldid=425"
Community content is available under CC-BY-SA unless otherwise noted.